Knockalongy (Cnoc na Loinge, meaning “hill of the encampment”) is the highest of the Ox Mountains. At its peak it is 544m(1785ft) high.

At the base of Knockalongy is Lough Achree (Lake of the Heart), reportedly formed in 1490 by an earthquake and is reputed to be the youngest lake in Ireland. The following is an extract from the Annals of the Four Masters (The Irish annals are a unique collection of annual records made in the monasteries of Ireland of political, cultural, social, religious, climatic events and disasters that took place in Ireland between sixth and sixteenth centuries.) “There was an earthquake at Sliabh Gamh, by which a hundred persons were destroyed, among whom was the son of Manus Crossagh O’Hara. Many horses and cows were also killed by it, and much putrid fish was thrown up; and a lake, in which fish is now caught, sprang up in the place.” The earthquake is reported to have caused the deaths of more than 100 people and many livestock.

There is many stories around of how the lough got its name. One such story is…

“A long time ago there was a farmer with a beautiful white stallion. But the stallion was wild and could not be tamed, he kept breaking the farmer’s fences. Other farmers told him the horse should be killed, but he loved him, and could not bear to do this. Instead, he decided to let him free on the mountain above Lough Achree, which did not have that name in those days. Every day he would come out and see the horse in the distance (there is a distinct white outcrop half way up the cliff behind the lake). One day, he went to see the horse, but to his horror saw that he had only been looking at a rock of quartz. He climbed down to the lake to see his beloved horse had fallen down the cliff into the lake. All he could find was the mighty heart of the stallion floating on the surface. Since that day, the lake has been called Lough Achree, the lake of the heart.”

The more likely explanation of how the lough was formed is that it is a corrie. Corries are ice eroded hollows on the sides of mountains with an amphitheatre shape backed by the mountain cliffs. In this part of the world they usually face north-west or north because this is where conditions were at their coldest. The word ‘corrie’ comes from the Gaelic for a pot or cauldron, and these are the same feature as a ‘cirque’ in France, Switzerland etc. Very often the hollow bowl is filled with water to hold a small round ‘corrie lake’ 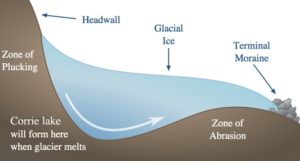