Many people may not know what the old tower at the top of Ballykilcash is or was, so here is a small write up about it and hopefully will explain more about it.

Carrowmably Signal Tower is built on a prehistoric Hengiform enclosure, thought to have as much importance as Royal County Meath. It was an Iron Age Fort dating back to between 500BC and 500AD.

Carrowmably is located with the Townlands of Carrowmably and Carrownrush in the parish of Kilmacshalgan, and the barony of Tireragh. It sits on a hilltop 136m above sea level close to the Atlantic coastline and is intersected to the north by a low earthen and stone bank running east-west which forms the townland boundary.

Built between 1804 and 1806 the Napoleonic Signal Tower located in Carrowmably, Dromore West was number 66 out of 81 built in total. 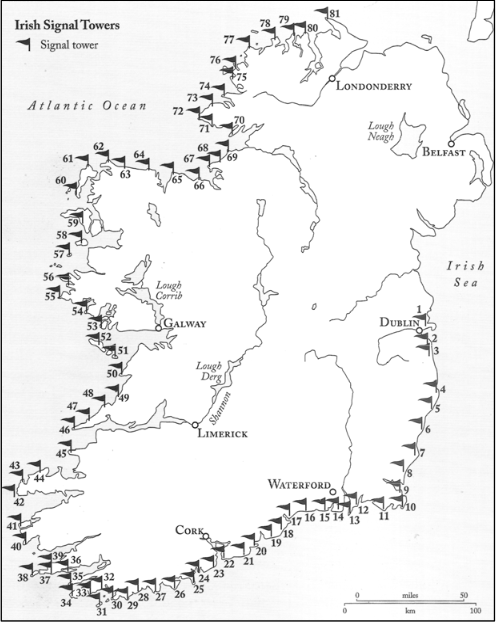 The signal towers worked on a signaling system or optical telegraph as it is sometime referred to, by raising or lowering a large rectangular flag, a smaller blue pendant (or a narrow rectangular flag), and four black balls in various combinations from a system centered on a 15m (49ft) wooden mast. The stations also communicated with ships and this is why the mast on the signal towers always faced the seaward side of the tower.

Every tower could see the adjacent signal tower on either side. If all of the 81 signal towers were operating simultaneously a signal could travel the 1,076km (669 miles) around the coast of Ireland from Pigeon House Fort in Dublin (Tower 1) to Banba’s Crown, Malin Head, Donegal (Tower 81). The average distance between signal towers was 13.5 km. The shortest distance was between Brow Head and Mizen Head, at 3.8km and the longest was between Ballydavid and Kerry Head, at 36.9km.

Sligo had 5 towers in total, 3 no longer present that were located at Knocklane (Tower 67), Streedagh (Tower 68) and Mullaghmore (Tower 69). 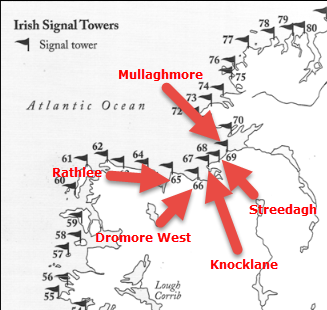 Following Nelson’s victory over the French and Spanish fleets at the Battle of Trafalgar in 1805, there was less threat of invasion, and by 1809 the British decided to abandon them.

These towers were hastily built and were very soon obsolete. It is said that a signal sent from this tower using a combination of flags, flares and revolving metal balls could get a signal to Athlone, in the centre of Ireland in 12 minutes, most were decommissioned by 1816, as the threat from Catholic Europe receded. This tower and all the signal towers in Sligo were abandoned in 1809; they were replaced with the Coastguard stations.